he exhibition consists of 101 posters since the beginning of the 20th century, from the collections of the Lahti Poster Museum of Finland.

Surprising, colorful illustrations depict in a refreshing way not only the development of graphic design, but also the development of Finnish society and economy. The exhibition gives a broad picture of sports, tourism, advertising, education etc. Many of the posters are early advertisements of well-known Finnish companies, such as Finnair, Nokia, Fazer and Sinebrychoff and others.

The exhibition is part of the jubilee year program for the 40th anniversary of diplomatic relations between Finland and Viet Nam in 2013.

Finnish poster art has developed since the late 19th century along with other European countries. During the last decades of the 19th century many Finnish artists studied in Paris, bringing new winds when they returned to Finland.

During the first decades of the 20th century posters and adverstisements were heavily influenced by national romanticism and Jugend-style, as Art Nouveau is called in Eastern  Europe. During the 1920’ies Finnish designers were influenced by Italian futurism, cubism and French graphic design. During the 1930’ies modernism started to replace national romanticism and classicism. A new generation of designers, educated in Finland, came to the fore.

After the Second World War the teaching of applied graphics began again in Finland. During the 1950’ies new winds started to blow with posters becoming more colorful and connected with the new era of commercialization. Influences were received from North America and continental Europe. A key poster designers such as Tapio Wirkkala and Timo Sarpaneva did posters.

The best posters of the 1960’s and 1970’s were designed in a social and ideological context. Their visual language was simple in order to maximize the impact. Abroad, the term “Finnish school” was coined to decribe the new generation of  Finnish graphic designers, including Kyosti Varis, Jukka Veistola, Pekka Kuronen, Erkki Ruuhinen and Heikki Ahtiainen.

In 1975 the Lahti Poster Museum was established and the same year the first international Lahti Poste Biennale was organized. In the 1980’s Tapani Aartomaa, Pekka Loiri and Kari Piippo presented themselves as “Pilot-group”, exhibiting their posters both in Finland and abroad and showing the way for others. Among the current younger generation designers a return to design principles of the 1960’s is visible. Social and ideological issues are again important and the lay out of poster is simple, often based on a photograph.

Remarks by H.E. Mr Kimmo Lähdevirta, Ambassador of Finland, at the opening reception of the exhibition of Finnish posters “100 years –

Thank you for closing your computer and taking the time to come and see our exhibition!

This exhibition is a key part of the festivities planned by the Embassy for the 40th Anniversary of Diplomatic Relations between Finland and Viet Nam in 2013. During the last decades we have done together many kinds of cooperation projects. Now we want to set our sights in the future and open possibilities for new actors and new kinds of cooperation, where partnerships are the key. Therefore the exhibition is accompanied by a business partnership seminar, with the aim of promoting closer contacts between Finnish and Vietnamese institutions and companies.

For the younger generations, born during the decades dominated by the TV and computers, posters may seem quaint. However, I want to assure you that they were – along with newspapers and magazines – a key media for visual communication. And it actually seems that as electronic media have become commonplace, posters may be regaining prominence. For example in Europe young people have started to do and collect posters again.

The posters on display provide a good picture of Finland’s development since the beginning of our independence. Many of the posters are commercial advertisements by companies still existing today. For example Finnair, which in June opened a new, direct route between Hanoi and Helsinki, was originally called Aero, or Finnish Air Lines.

Some posters advertise important national or cultural events, such as the Olympic Games in Helsinki in 1952, or tourism, or different kinds of national fairs and exhibitions. Yet other posters promote important societal topics such as traffic safety, temperance, anti-narcotics work, environmental issues and so on.

And as you can see, the styles and the way of doing things have changed quite a bit during the decades. Yet in all the best posters there is one common thing: they are – or should be – understandable and have an impact not only in their own country, but even on the other side of the world.

But, for those interested to find out more about Finnish poster art, we have a leaflet available, in addition to the exhibition catalogue, over there. Therefore I will just mention one thing which has been instrumental also for this exhibition.

Following the example of Poland, the Lahti Poster Museum was established in 1975. The museum was the first of its kind in the Nordic countries and acted in many ways as a trailblazer. A key event they have organized since 1975 is the Lahti International Poster Biennale, which from now on will be a triennale, organized every three years. Thanks to the biennale, the museum now has an extensive collection of Finnish and international posters.

To end my speech, I want to thank some key people who have made this exhibition possible.

First of all, the whole thing was created by Graphic Designer Pia Kaikonen, without whose professional expertise and enthusiasm this project would not have been possible.

Secondly, the works on display were selected by Mr Kari Savolainen, Curator of the Lahti Poster Museum, from the collections of the Museum. Exhibition poster was designed and production of the posters in Viet Nam was organized by Graphic Designer Claude Jacquelin. Unfortunately they are not able to be here today.

I also want to thank sincerely Mr. Phung Anh Tuan, Honorary Consul General of Finland in Ho Chi Minh City and your team for your invaluable support in organizing this event.

And finally, as money makes the world go around – and can even bring exhibitions to the other side or the world – I want to draw attention to the sponsors of the jubilee year, without whose support we could not have done this!

So, thank you all very, very much!” 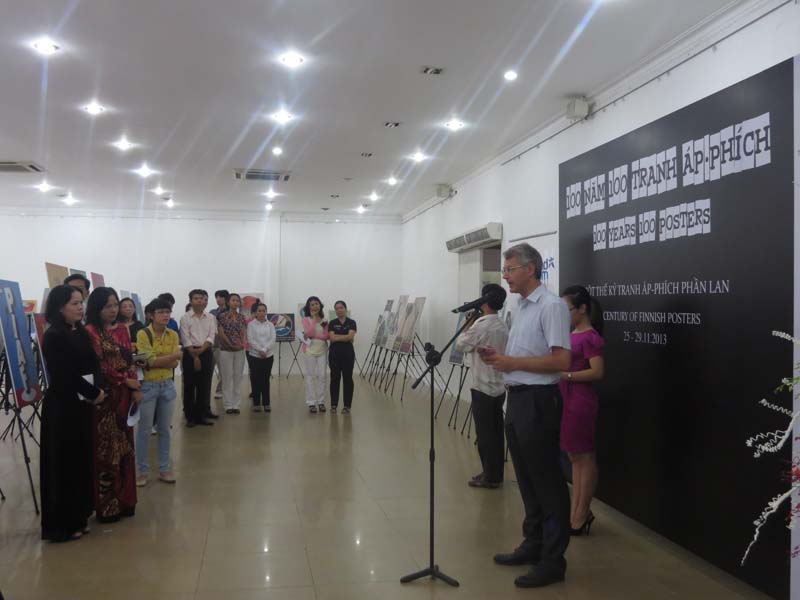 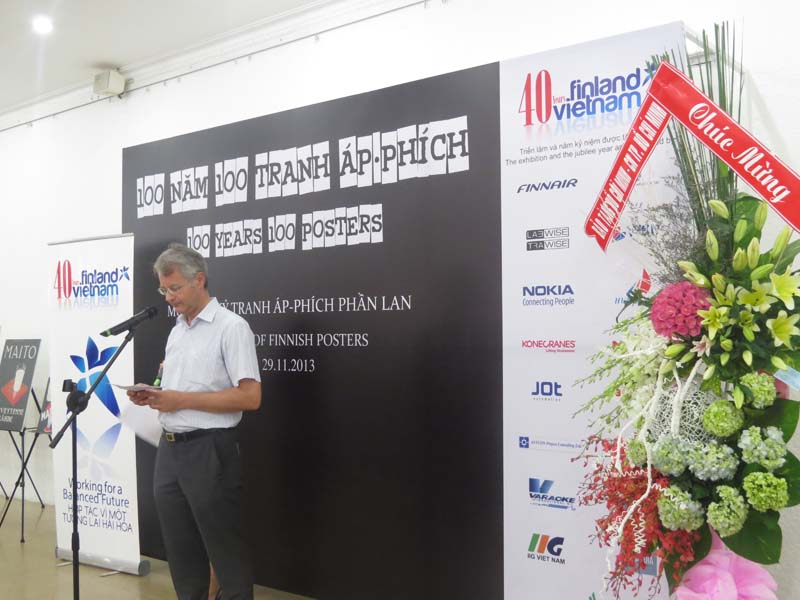 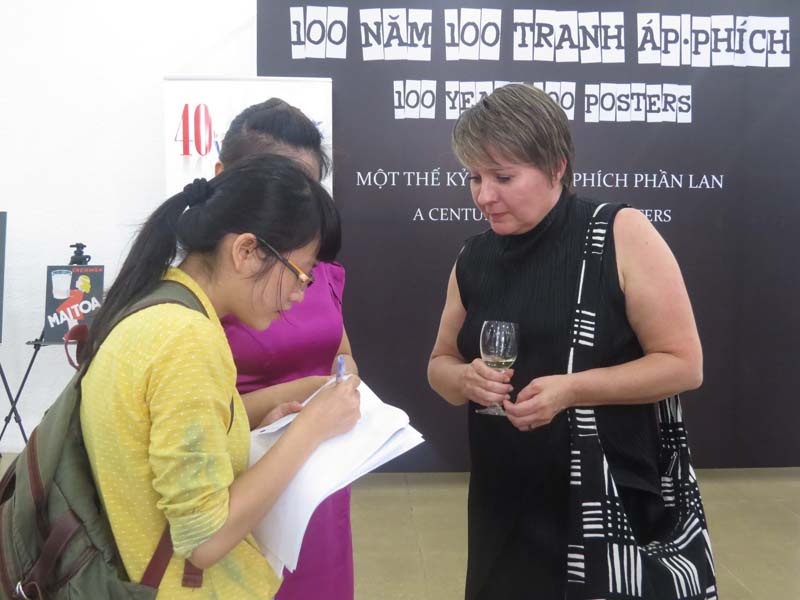 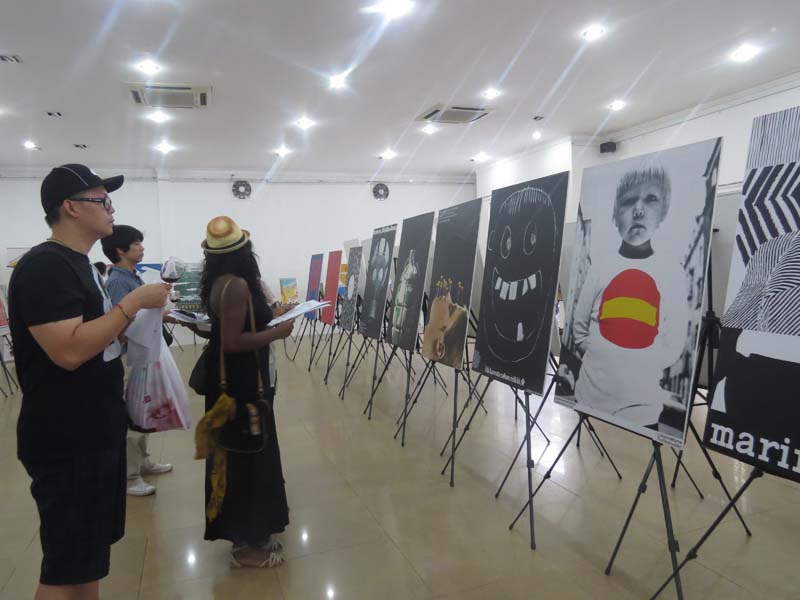