During the recent period, The Museum of Ho Chi Minh City has made the correction of contents and forms of the “Souvenirs of war resistance” display to timely open and serve visitors on the 39th anniversary of Southern Vietnam liberation and national unification (Apr. 30, 1975 – Apr. 30, 2014).

The Museum of Ho Chi Minh City displays 250 artefacts which are the relics from the revolutionary soldiers who took part in the resistances to the French (1930 – 1954) and to the American (1954 – 1975). The former generations’ relics remind visitors of a time of heroic struggle with so many difficulties, hardships, sacrifices, and losses for our national independence.

The dragon-head cane of President Tôn Đức Thắng: During his imprisonment on Côn Đảo, Uncle Tôn Đức Thắng made the said cane. After the success of the Aug. 1945 Revolutionary, comrade Hồ Văn Biên was ordered by the Party’s Southern Committee to sail ships to Côn Đảo and take the political prisoners back to the mainland. When arriving  in Côn Đảo, comrade Biên met Uncle Tôn, and was given the cane by him as a souvenir.

Relics of the reconnaissance martyrs, Gia Định Regiment; Having its predecessor as Quyết thắng battalion, the regiment was established in 1964, made many good records in the resistance to the American, and was awarded the title of Vietnamese People’s Armed Forces Hero, by the State.

Relics of unknown soldiers having their sacrifice at Phú Thọ Hòa in 1968; relics of the 8th Artillery Battalion.

Artefact collection of General Văn Tiến Dũng: The belongings used by him during the time he acted as Chief of General Staff of Vietnamese People’s Army, representative of Central Military Committee and General Headquarters in the Western Highlands Campaign, and Commander of Command Post in Hồ Chí Minh Campaign.

Resistance badges: souvenirs of those comrades who took part and made good records in the two resistances, such as: medal of “National Strong Citadel” presented by the Government of Democratic Republic of Vietnam to Mr. Trần Văn Đi in 1954; Badge of “Emulation soldier” in 1968 and Memorial medal of “Vietnamese National Defense Intelligence Service 2002”, awarded by General Department II, Ministry of National Defense to Mr. Trần Quốc Cương, former teacher of intelligence techniques, School A11 – J22, on Sep. 15, 2002, for his contributions to Vietnamese Intelligence Service ….

Artefacts of front-line psywar entertainment teams: The musical instruments, and flutes … previously used by the psywar entertainment soldiers from Trường Sơn road to the Southern front, relieved the hardships, laboriousness, and danger on the fierce battlefield, bringing about joy to the revolutionary officers and soldiers.

Personal belongings of Trường Sơn soldiers: Trường Sơn road, the legendary one, has been entered in poetry, and songs. This strategic road was used to transport weapons, food … and equipment from the large rear, the North, to Southern battlefield. According to the data from Headquarters 559, there was the sacrifice of nearly 30,000 soldiers for 16 years. The simple things for daily living remind us somewhat of the hardships and want suffered by the solders on Trường Sơn road. Among these are the handbag of major-general Trần Văn Danh, the long cloth bag for rice holding of major-general Mai Văn Phúc …

Cameras, and motion-picture cameras of battlefield reporters: took historic feet of film and photos for the subsequent generations. Among these is the camera as a gift from Southern people to Uncle Hồ in 1954, which was used by professional photographer Đinh Đăng Định to take the dear photos of His. After Apr. 30, 1975, professional photographer Đinh Đăng Định handed the said camera to comrade Lâm Tấn Tài, Secretary General of Ho Chi Minh City Photographers’ Association.

Hoàng Cầm’s oven model: Under the motto “Go without footprint; cook without smoke”, Hoàng Cầm’s oven appeared for the first time in Hòa Bình campaign, 1953. This was an initiative named after the feeding squad leader of the treatment platoon, Division 308, which helped solders have well-cooked foods, and boiled drinks right at the battlefield without any smoke or fire being found out by the enemy’s planes.

Resistance sketches: Hardships in operation did not discourage the soldiers, and even inspired painter Phạm Thanh Tâm to producing the sketch “The story of operation”, painter Lâm Quang Nới to the sketch “Pull artillery across the river, “Take artillery into the battlefield”, painter Trang Phượng to the work “Advance into Sài Gòn”, and painter Huỳnh Phương Đông to the work “On Soài Rạp riverside …

Artefacts of Division 351 soldiers: drawing-pencils, split-nibbed pens, drawing-knives … for sketches, and oil-paintings during the period of resistance to the French and to the American (1954 – 1975). 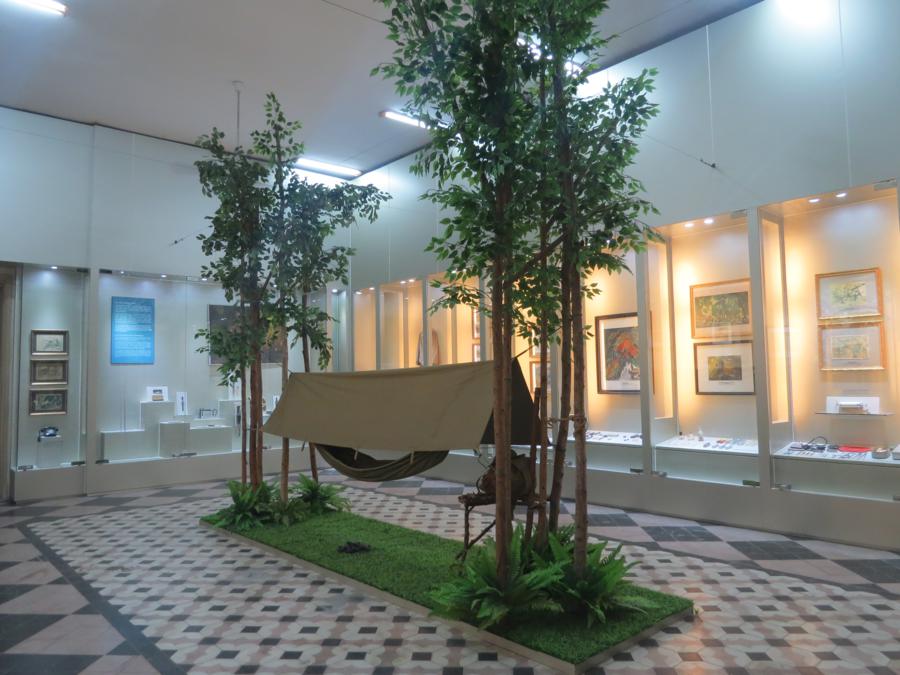 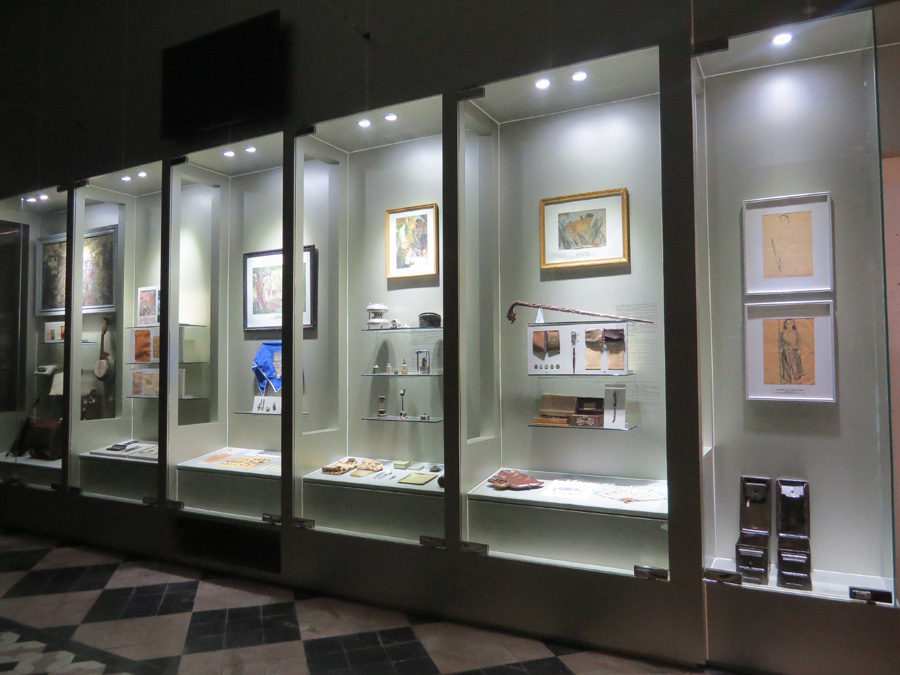 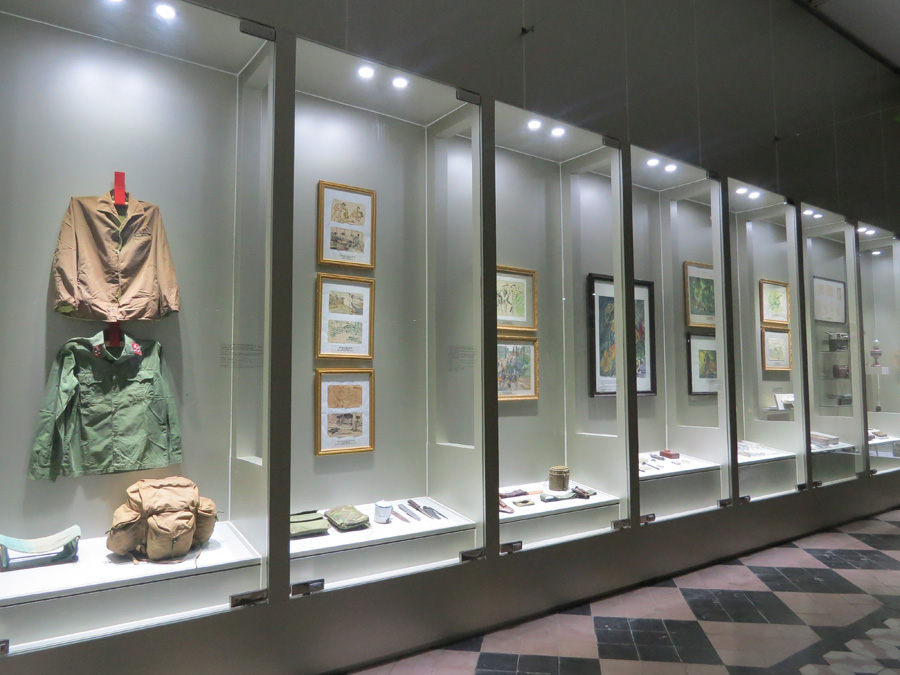 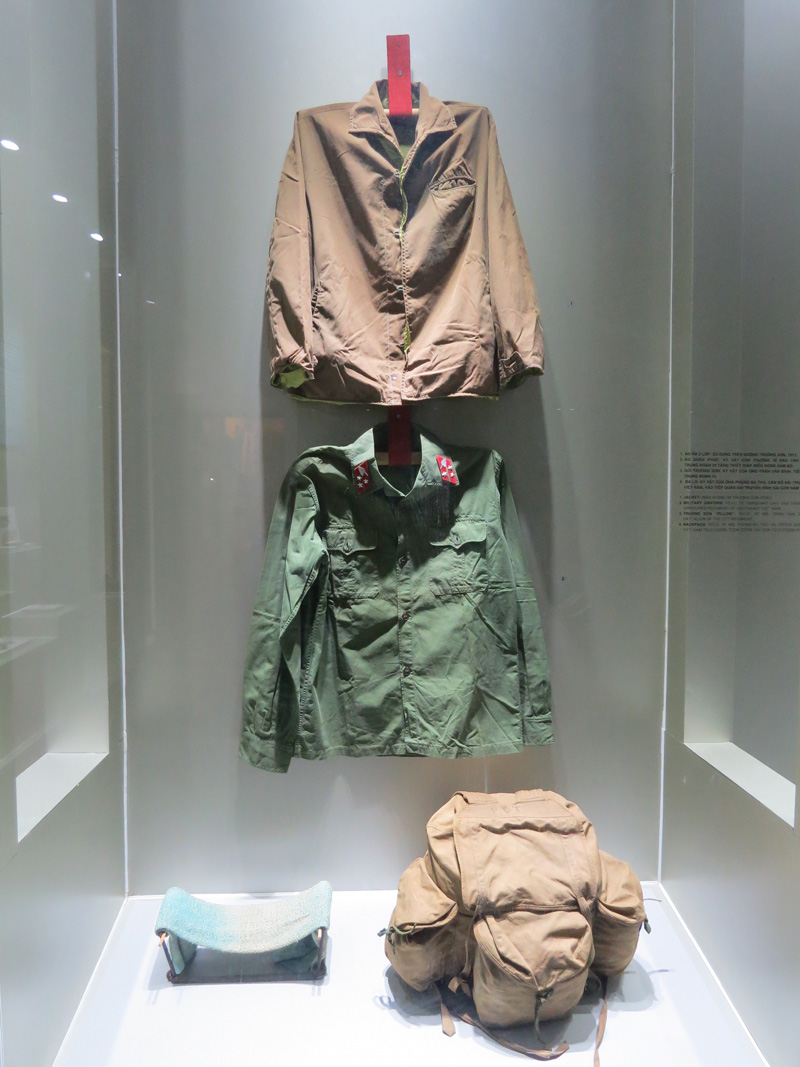