The Vietnamese Nation has  its own unique, diversified art. The XVIIth century, together with the “Viet” immigrations to the south, in the historical condition of a new land and especially the accuturation between the ethnic people as well as the western culture. It sped up the development and formed special characteristics in the form of social entertainment provided by amateur musicians (called  Don ca Tai tu),  “Hat Boi” and “Cai luong” theatre arts. On the other hand, various types of Khmer art were performed as “Robam” and “Du Ke” or  “hat kich”, “nhac kich” of the Hoa people with the unique musical instruments. This creates for music a specific and typical feature of the South. Sai Gon-Gia Dinh was open to new cultural value, not only for its excellent mark of the art, but also a cultural and educational centre of the South with a traditional fondness for learning, venerating the teacher as well. Many notables emerged from this land such as Vo Truong Toan and his pupils in the “Gia Dinh Tam Gia” (the three famous scholars): Trinh Hoai Duc, Le Quang Dinh and Ngo Nhon Tinh. It was also the first centre for propagating national language and where newspapers were first published in Vietnam.

The cradle of “Hat Boi” was from the stage of “Hat Tuong” has to be 700 years ago in Vietnam. But “Tuong” thrived best in the middle of Vietnam during the Nguyen dynasty.

Development in the South, “Tuong” converted into “Hat Boi”, they are different from the names, but the art is still basiscally the same. About the same, singing male, singing guest… about orchestras are: percussion (the drum), the steam (other brass), ect..

The first plays such as San Hau, Kim Thach Ky Duyen were popular in the Gia Dinh stage in the mid-19 century or in Bac Lieu as theatre company of  Bau An (Mr. An showman).

There were many eminent orchestras and artists such as “Bau Bon”, “Bau Thang”, “Ba Do”, “Nam Ut”, ect.

In recent years, implementation of the policy encouraging the culture of Vietnam has strongly advanced national identity. “Hat Boi” is cared and promoted more to commensurate with the stature of the traditional stage of the South.

“Cai luong” Theatre art was the combination of  “Don ca Tai tu” (a social entertaiment provided by amateur musicians) and southern folk-song. It developed rapidly in late 19th century in the South. In 1917, the first play Luc Van Tien of author Truong Duy Toan was performed at Nam Tu theatre in My Tho

Specific characteristics of “Cai luong” theatre art  were the narrative genre in first person and lyric. The two factors singing and speaking are the  close combination in a Cai luong Theatre play.

Cai luong stage also diverse in subject and style show. Two types of common theme of “Cai luong” play revolve around the historical and social contents while the thoughts expressed patriotism and rich gratitude of the Vietnamese.

So far, through nearly a century of development, “Cai luong” has gained brilliant achievements and increasingly asserted its role in the traditional stage of Vietnam.

– Record-player in the XXth century 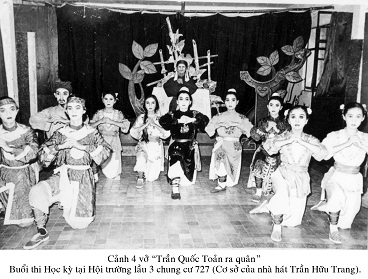 These musical instruments were made by manual methods and made of  natural materials such as wood, bamboo, small bamboo… and their composition have officially arranged in folk and pentatomic orchestras. The term “pentatomic” here refers to five different materials: copper, iron, wood, leather and air.

Khmer folk-music instruments became valuable assets, contributing to enrich the cultural identity of Vietnam. That cultural values should be to maintain, preserve and promote. 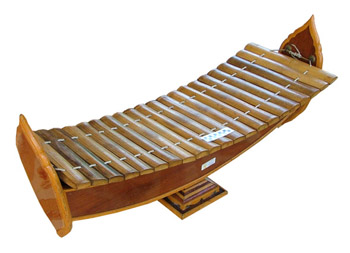