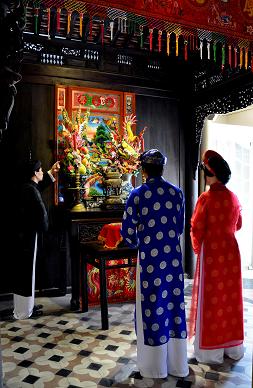 * Weddings of the Viet ethnic group in the South Vietnam

Weddings are one of the most important nuptial ceremonies of one’s life. According to the old tradition, wedding of Vietnamese includes 6 main rites:

– A pair of candles (made from beeswax)

There are many similarities between nuptial ceremonies of the Hoa and the Viet, both of them based on the ritual book of Chu Hy, a scholar of Confucianism the Song dynasty. The traditional ceremonies of the Hoa include 6 main rites: bringing wine to the girl’s home; pre-betrolthal; informing the girl’s family of good lots; engagement ceremony; suggesting to fix the nuptial time; bride’s procession to the groom’s house. As the Viet, today, the major rites of the Hoa includes meeting the girl’s family, engagement ceremony and wedding ceremony. Wedding offerings are often roast pork, chicken, duck, fruit, cakes …

* Khmer weddings in the South Vietnam

* Cham Islam weddings in the South

The wedding ceremonies of the Cham Islam in the South consist of 4 main rites:

Wedding costumes of  the Khmer bride and groom

* Collection of tools for betel chewing